The Art of Home Staging

Like many sellers, Fran Sarro and David Waite were initially reluctant to stage their apartment.

Their agent, Anna Kahn, an associate broker at Halstead Property, had already helped them declutter and identify home improvements for their two-bedroom ground-floor co-op at 134 West 82nd Street.

Following Ms. Kahn’s advice, the couple had spent about $45,000 tearing out carpets, installing hardwood flooring and new light fixtures, painting, repointing brick and replacing siding on a wall in the rear garden.

But they stopped short of hiring a professional stager to swap out their furniture and art. “I was extremely skeptical,” Ms. Sarro said. “I couldn’t see why things that I had collected over my life, sparsely placed, would be a problem.”

They listed the apartment for $1.85 million in June 2014. Then they watched, dismayed, as it sat on the market for six months, while they gradually cut the asking price to $1.65 million. “I had over a hundred showings, and could not sell it,” Ms. Kahn said. “Not one offer.” 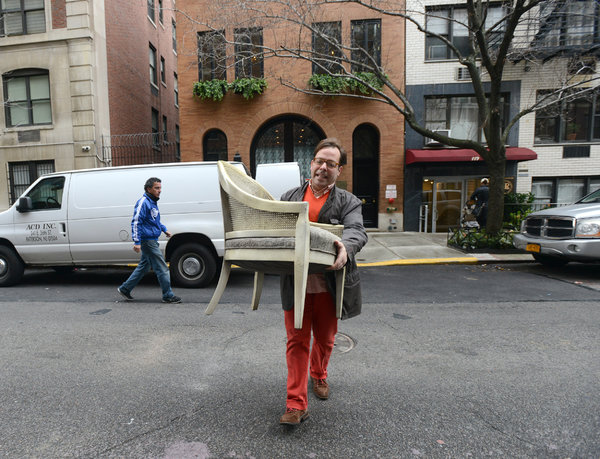 Mr. Salvatore carries a chair to the Park Avenue apartment being staged.CreditJennifer S. Altman for The New York Times

The couple took the place off the market that December, and at Ms. Kahn’s behest, sent for the home stager Nahila Chianale, the owner of NCC Luxe in New York.

To Ms. Chianale, the home’s décor was too eclectic, “like Victoriana meets ’80s meets Ikea,” she said.

She instructed the couple to empty the apartment, except for one small bench that she deemed attractive. Then, for about $26,000, she had the kitchen cabinets, shelving, doors and door frames painted white, and moved in an entire home’s worth of contemporary furniture, including shapely clear acrylic dining chairs and a white pedestal table, an Italian linen sofa and a chrome-and-glass coffee table placed atop a cowhide rug.

When Ms. Kahn relisted the staged property last April for $1.495 million, “the place was mobbed,” at the first open house, Ms. Sarro said.

A bidding war ensued, and the apartment soon went into contract for $1.8 million, before closing in July.

“I can’t believe how it worked out,” Ms. Sarro said. “I still shake my head.”

The practice of home staging has long elicited strong reactions. Agents and professional stagers point to examples like the Sarro-Waite apartment, and say staging can usually help a home sell faster, and for a higher price, offering a larger return on the investment.

Homeowners, reluctant to spend the money or admit that their decorating choices might not be catnip to buyers, are often loath to pay strangers to impose their tastes on their premises.

But as staging has evolved over the past decade, many real estate professionals say it has become more important — and more sophisticated — than ever.

“It always makes a difference, and is essential in this market,” said Richard Balzano, an associate broker at Douglas Elliman Real Estate who frequently refers his clients to stagers and even pays for the preliminary consultations.

In the past, many stagers focused on decluttering and implementing minor tweaks in furnished homes. Or they appointed vacant apartments with basic rental furniture to prove that rooms were large enough for regular sofas and queen-size mattresses.

Today, they are increasingly tackling all-out transformations that aim to present compelling contemporary design, while projecting a complete aspirational package.

“It’s not just about solving a problem now, but much more about presenting a lifestyle to prospective buyers,” said Jane Saidenberg, the design director of Studio D, a staging company with offices in New York and San Francisco. “People want it to look like a shelter magazine, or like something they’ve seen on TV. It’s more elevated than it has been in the past.” 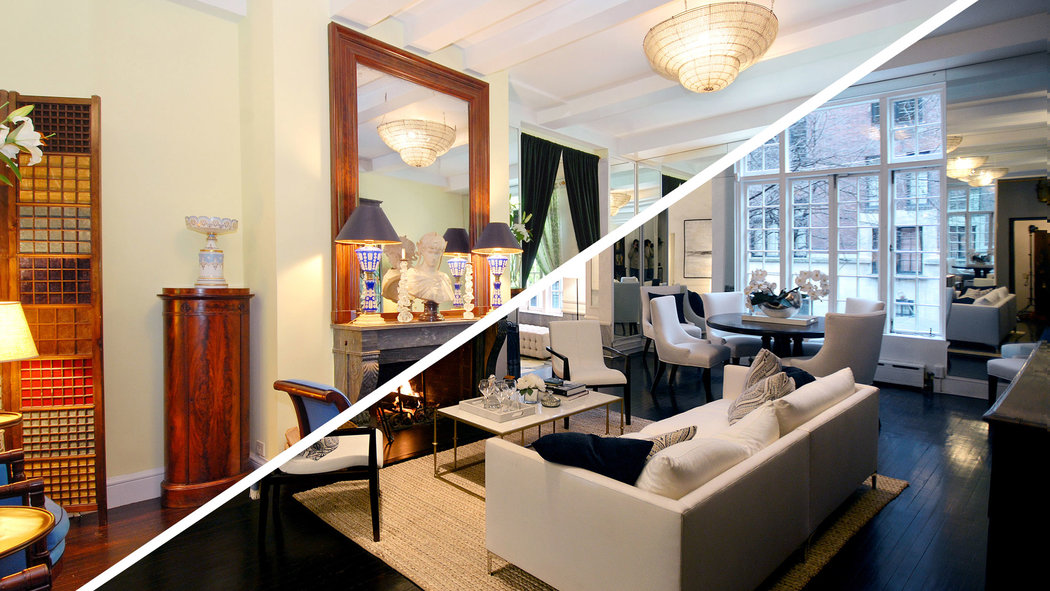 “The bar has definitely been raised. The glamour apartment is really what sells,” Mr. Balzano said. “People will walk out if it looks ugly, or they think it’s dark, claustrophobic or has other warts they don’t want to deal with.”

The reason, said Frederick Peters, the president of Warburg Realty, is simple: “In New York, in recent years, there have been so many opportunities in newly constructed buildings where you don’t have to do anything, that buyers have lost both the appetite and ability to see through years of debris.”

Robby Browne, an associate broker at Corcoran Group Real Estate, shares this opinion. “Things have changed, in terms of people’s expectations — they expect apartments to be bright and fresh,” he said. “That’s a result of all the new developments coming on the market, where they have beautiful sales offices and staged apartments where everything is done.”

That’s why Mr. Browne recommended a complete home staging for a co-op his team is selling at 170 East 78th Street. This was even though Architectural Digest magazine had featured the place in 2011, describing “an ethereal dining room modeled on a czarist winter garden” and one of the two bedrooms as “such a perfect Empire bijou, with striped silk on the walls, an exotic nude over the mantel, and a steel campaign bed, that you half expect to meet Napoleon’s ghost.”

Ghosts, even Napoleonic ones, don’t play all that well in today’s market.

After being convinced that ornate furniture and heavy fabrics are now turnoffs for most buyers, the apartment’s owner, Jean-Paul Beaujard, an antiques dealer and decorator, moved out, sent his things to Lockson, a moving and storage company, and paid Meridith Baer Home about $20,000 to do away with the First Empire.

“Today’s buyer doesn’t want that look,” said Ms. Baer, a Los Angeles stager whose company has expanded into other cities, including New York. “They want sheer or linen curtains, and they don’t want the home packed. They want a cleaner, simpler lifestyle. And more flair and fun.”

Ms. Baer, who has a long list of celebrity clients, added that her firm used a similar approach to stage a Greenwich Village penthouse owned by the actress Julia Roberts, which sold for $5.35 million, $850,000 over its asking price, this past October.

“It’s the complete opposite of what I like,” Mr. Beaujard said of his overhauled space. But, “now, you see the proportions of the apartment better. Even I was surprised.”

In mid-January, after it had been on the market for one and a half months, Mr. Beaujard accepted an offer for his apartment, which had been listed most recently for $2.695 million.

Many sellers have heard the staging edicts to paint all their walls off-white, and to remove all personal photos. Perhaps they have even heard that they should set the dining table with plates and glasses, or bake cookies before showings for a pleasing scent. 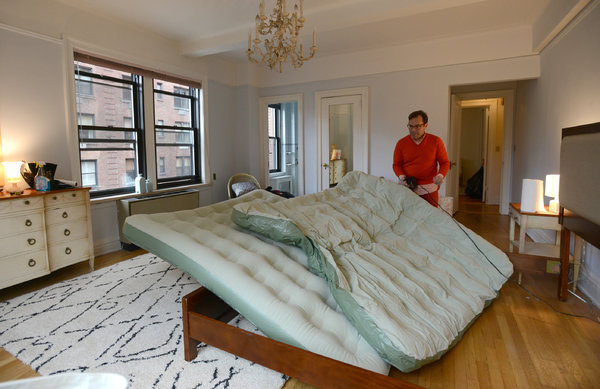 Mr. Salvatore blows up a mattress at the Park Avenue apartment.CreditJennifer S. Altman for The New York Times

That advice does not hold much water today, said Sid Pinkerton, the owner of Manhattan Staging. “I’m doing more accent walls than I’ve ever done,” he said, including individual walls covered in dark brown lacquer, bursts of coral or aqua paint and patterned wallpaper with a rainbow of color.

“People are looking for more personality,” he said. “It used to be more innocuous, where you didn’t really want to convey a sense of style. Now, it’s gotten a lot more modern.”

Although few stagers would recommend leaving an entire wall of baby photos in an apartment, a handful of attractive photos in handsome frames might actually help create the right environment.

“If a photo shows the family on vacation, maybe someplace warm and nice, that ties into a lifestyle a buyer might want to emulate,” said Donna Dazzo, the president of Designed to Appeal, a staging company that operates in New York and the Hamptons.

“When I see a tray on a bed, with a coffee cup, I think, ‘Oh, come on,’ ” said Anne Kenney, the president of the New York staging company Anne Kenney Associates. “Does anybody really live that way? Today’s buyer is more sophisticated, so they don’t want to see phony.”

David C. Salvatore, the creative director of Edge Mid-Century Designs, a staging and vintage furniture company in Clifton, N.J., and a salesman at Warburg, noted that a good staging job shouldn’t look like a stage set.

“The biggest compliment I can get,” he said, “is when someone walks in and asks if it’s staged, because they can’t tell.”

Mr. Salvatore recently staged a three-bedroom prewar co-op at 975 Park Avenue for an estate sale listed by his colleague Dorothy Schrager, an associate broker at Warburg.

It was a respectable apartment, with lots of dark wood and built-in shelving, that just wasn’t moving after being listed in June 2015 for $5.999 million.

Before putting it on the market the first time, “We removed some items, but didn’t have the heart to get rid of a lot of things that were meaningful to us,” Laurie Goldberg, a daughter of the late owners, wrote in an email.

That turned out to be a problem. “People loved the layout, but couldn’t envision the apartment’s potential,” she noted. “They thought it was tired looking and needed too much work. They couldn’t get past the dated look of the furnishings.”

After the apartment sat on the market for six months, Ms. Goldberg hired Mr. Salvatore to stage it in December for about $20,000. 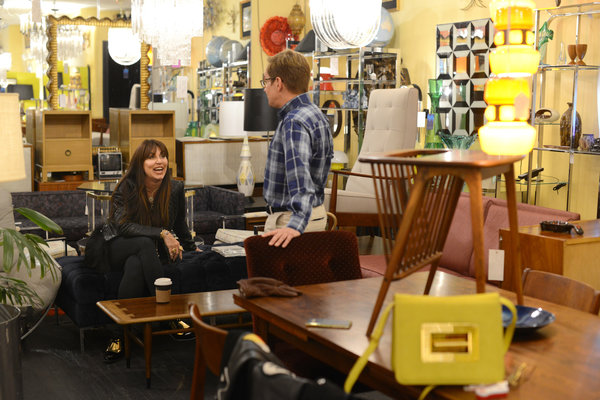 Nahila Chianale of NCC Luxe, who stages homes for sale, shops for furniture at Las Venus in Manhattan. CreditJennifer S. Altman for The New York Times

He had the majority of furniture and accessories removed, carpets and many of the built-ins torn out, wood floors buffed and two bedrooms that had been converted to offices returned to their original function.

Then he brought in distinctive contemporary furniture with a light and airy appearance, including leggy living room chairs upholstered in a zebra-print fabric and twiggy side tables with glass tops, along with sculptural ceramic vases and figurines for a little charm.

Earlier this month, Ms. Schrager relisted the staged apartment, now priced at $5.3 million. She said the number of prospective buyers touring the property had increased.

One downside of such comprehensive interventions is that staging is now generally more expensive than it used to be.

Staging a two- or three-bedroom apartment can cost about $20,000 to $30,000, not including the cost of moving and storing existing furniture. Staging a much larger apartment, or a townhouse, can cost $100,000 or more.

For sellers who aren’t ready to make such an investment, but are willing to do work themselves, some stagers also offer consultations and provide written recommendations for a much smaller fee.

When Jeffrey Davis and Betty Wang were preparing to list their three-bedroom co-op at 181 East 73rd Street for sale, their agent, Mr. Balzano, hired Ms. Brock to evaluate the place.

“Beauty is in the eye of the beholder,” Mr. Davis said. “She pointed out a lot of very interesting things that a buyer might see.”

Mr. Davis hired a building handyman to do much of the work, and rented some replacement furniture from Churchill Furniture Rental for three months, for a total of about $4,000, before listing the apartment for $2.695 million earlier this month.

There was just one suggestion from Ms. Brock that he refused to accept. The bedrooms occupied by his two sons are painted spring green and turquoise, and Ms. Brock wanted them painted more neutral hues.

“She was adamant about painting my kids’ bedrooms, which I totally disagreed with,” Mr. Davis said. “If people can’t see through a paint color to buy an apartment … ” he added, stopping midsentence in disbelief that such a seemingly minor thing could derail a sale.

“My wife and I decided not to do that,” he said. “These are kids’ rooms and they’re happy colors.”