One of the longest economic expansions in American history remains so fragile that the Federal Reserve said on Thursday it would postpone any retreat from its stimulus campaign.

Janet L. Yellen, the Fed’s chairwoman, described the decision as a close call and said the central bank still expected to raise interest rates later this year. The Fed has kept its benchmark interest rate close to zero since late 2008, when the nation’s economy was at the depths of crisis.

“The recovery from the Great Recession has advanced sufficiently far and domestic spending has been sufficiently robust that an argument can be made for a rise in interest rates at this time,” Ms. Yellen said at a news conference.

But, she said, “heightened uncertainties abroad,” including the Chinese economy’s weakness, had persuaded the bank to wait at least a few more weeks for fresh data that might “bolster its confidence” in continued growth.

The Fed’s decision, announced after a two-day meeting of its policy-making committee, had been widely expected by investors in recent weeks.

Fed officials spent most of the summer suggesting that they wanted to raise rates in September, only to lose confidence as signs of slowing global growth weighed on markets.

There were signs, however, that the Fed might hesitate only briefly. It separately released economic projections showing 13 of the 17 officials on the Federal Open Market Committee still expected to raise the benchmark rate this year.

The Fed has said it is moving toward raising rates because it expects economic growth to continue, reducing unemployment and eventually raising inflation; on Thursday, Ms. Yellen said that outlook had not changed.

“There’s a tendency among some to think that they’re always going to get cold feet, and I thought Yellen really as much as possible discouraged that kind of thinking,” said John L. Bellows, a portfolio manager at Western Asset Management.

The policy-making committee still has scheduled meetings in October and December, and Ms. Yellen said a rate increase was possible at either meeting.

One official, Jeffrey M. Lacker, president of the Federal Reserve Bank of Richmond, in Virginia, voted to raise rates at the September meeting, the first dissent this year. The economic projections suggest that Ms. Yellen faces more disagreements at the Fed’s October meeting, given that six officials predicted the Fed would raise rates at least two times this year, while four said that they expected no increases.

The latest postponement was welcomed by liberal activists and economists who argue that the recovery remains incomplete. Representative John Conyers Jr., Democrat of Michigan, introduced legislation on Thursday directing the Fed to push the unemployment rate below 4 percent. While the bill has no chance of winning approval in the Republican-controlled Congress, Mr. Conyers addressed a rally organized by the Center for Popular Democracy outside an office building where Ms. Yellen spoke, joining in a chant of “Don’t raise interest rates.”

Critics expressed concern that the Fed has adopted increasingly ambitious goals for its stimulus campaign. “There is always a reason to chicken out,” said Dean Croushore, a professor of economics at the University of Richmond. “The Fed will lose credibility over time, as it fails to follow its own prior announcements about when it will increase rates.”

Ms. Yellen, asked about the efforts to put public pressure on the Fed, which have mounted in recent months, dryly observed, “We have been receiving advice from a large number of economists and interested groups.”

She denied that outside pressure had influenced the Fed’s decision. She also said it had not been influenced by concerns about a potential government shutdown, which could disrupt growth, though she said that it “would be more than unfortunate.”

The Fed’s decision is probably a “mixed blessing” for the global economy,” Eswar S. Prasad, an economics professor at Cornell, said in an email. Instead of new pressures, investors must deal with continued uncertainty.

A Fed increase, for example, might have prompted investors to pull money out of countries like Turkey or Brazil, damaging their economies, and reduced demand for imports from Europe and other developed countries. But the decision to stand pat also could weigh on Europe in the short term if it causes the euro to rise against the dollar, making things harder for exporters.

The American economy is outpacing the rest of the world, and Ms. Yellen said on Thursday that the Fed did not yet see evidence that growth was slowing.

Fed officials say they believe that labor market conditions have nearly returned to normal. In the new round of economic projections, officials estimated unemployment would stabilize next year at 4.8 percent, just below the August level of 5.1 percent.

Officials also remain confident that inflation will rebound, although perhaps a little slowly because of the recent downturn in the prices of oil and other commodities. Since the financial crisis, inflation has remained consistently below the central bank’s 2 percent annual target, lately rising just 0.3 percent over the previous year.

Fed officials argue that a tighter labor market will lead to higher inflation as employers are finally prodded to pay higher wages. But, Ms. Yellen said on Thursday, that will happen more slowly than the unemployment rate might suggest, because people not counted among the unemployed — like those who have stopped looking for work or have taken part-time jobs — may start looking again as conditions improve.

James A. Wilcox, an economist at the University of California, Berkeley, said that it was difficult to find evidence for a strong connection between inflation and employment, particularly over the last decade. Inflation fell less than expected during the recession, and it has increased less than expected in the aftermath.

“The events of the last 10 years have caused a lot of rethinking and stomach acid within the Federal Reserve and the research community,” Dr. Wilcox said.

Recent history has reinforced the more basic point that it takes a lot to change the underlying pace of inflation. That stability has allowed the Fed to press its stimulus campaign, but Dr. Wilcox said it also provided a good reason for the Fed to be wary of allowing inflation to climb, because reversing the trend could be very painful.

“If the heat builds slowly, and it can only be turned down slowly, then you have to move ahead of time,” he said. “That’s why there’s sympathy for the idea of starting to raise rates relatively soon.”

Given the weakness of economic growth, however, Ms. Yellen reiterated on Thursday that the Fed planned to raise rates more slowly than its past practice. Fed officials expect the benchmark rate to reach 2.6 percent by the end of 2017.

In June, they predicted the rate would reach 2.9 percent. Officials also expect the rate to reach a new plateau of about 3.5 percent, less than the June prediction of 3.8 percent and significantly below the level once regarded as normal. Such a low plateau would limit the Fed’s ability to respond to economic downturns.

The Fed has already held its benchmark rate near zero much longer than it once expected. It announced in 2012 that it would keep rates near zero at least until the unemployment rate fell below 6.5 percent. That threshold was crossed in April 2014.

Last winter, when the Fed ended its bond-buying campaign, officials pointed to June as the most likely moment for “liftoff” from the so-called zero bound.

Some officials have made clear they are not inclined to wait much longer.

Stanley Fischer, vice chairman of the Federal Reserve, warned in late August that officials would not be able to postpone a decision until all doubts were resolved. “When the case is overwhelming,” he said, “if you wait that long, then you’ve waited too long.”

Ms. Yellen echoed that warning on Thursday. “We don’t want to wait until we’ve fully met both of our objectives to tighten monetary policy,” she said.

The Fed’s hesitation on Thursday echoed events of two years ago, when investors expected the central bank to announce at its September 2013 meeting that it was tapering its bond purchases. The Fed demurred, citing uncertainty about economic conditions.

Instead of September, it acted in December.

Why the Fed Did Not Raise Rates

Officials are now debating whether the economy is strong enough to start raising rates. But when the Fed does move, borrowing costs and interest rates on savings are likely to start climbing. 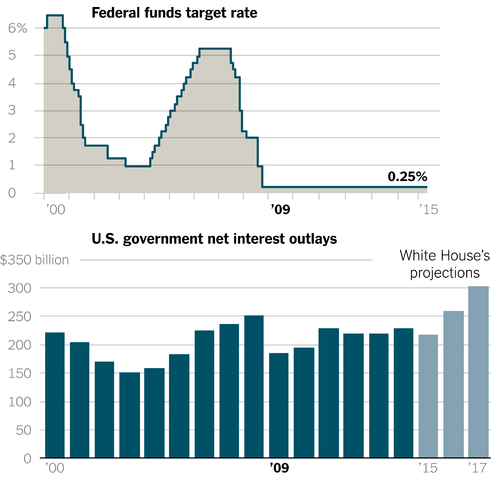