Why The U.S. Housing Market Will Remain Alive And Kicking in 2016

Why The U.S. Housing Market Will Remain Alive And Kicking in 2016

If you live in Coastal California, you don’t need national housing statistics to tell you that the housing market is in good shape – stick a “For Sale” sign in the yard and there are dozens of offers within a few days.  If you are a seller or homeowner in the some of the less-than-hot spots, you can still take some comfort from the majority of indicators that suggest that the market is not only solid, but still improving. Worries about the state of the economy and the stock market justifiably create some jitters.  However, the factors that positively influence real estate, such as employment, interest rates, and low inventory, are likely to trump the detractors looking ahead into 2016.

First, the data.  Given recent poor economic figures, analysts were pessimistic heading into the release of January’s housing data.  They were positively surprised to learn Tuesday that existing home sales climbed 0.4% from the last month, which translates into a healthy 11% increase since the same time last year. Despite January being a typical cold weather month, existing home sales were the second strongest month since 2007. Interestingly, the data produced by the National Association of Realtors dissects the data by home price, not just by region.  This data indicates that most of the market has witnessed significant gains since last year – except for the cheapest priced homes (sub $100,000) which amount to about 16% of all existing sales.

New home sales data released Wednesday wasn’t so great, indicating a fall of 9.2% since December, led by a huge drop in the Western region of the U.S.  As is the case with housing data and weather, the monthly information is highly volatile.  Since December 2015 showed an outsized positive month for new sales, it is not shocking that January’s figure reveals an outsize negative.

Prices are performing well.  The most closely watched index on home prices is the S&P/Case Shiller index, which showed home values improved by over 5% at the end of 2015 compared to a year earlier.  The 20 large city index they track showed a higher climb in prices, closer to 6%. Inventories have been somewhat smaller than normal so buyers have been chasing fewer houses and driving prices up.  More sellers are likely to emerge in the coming months to take advantage of these higher home prices. 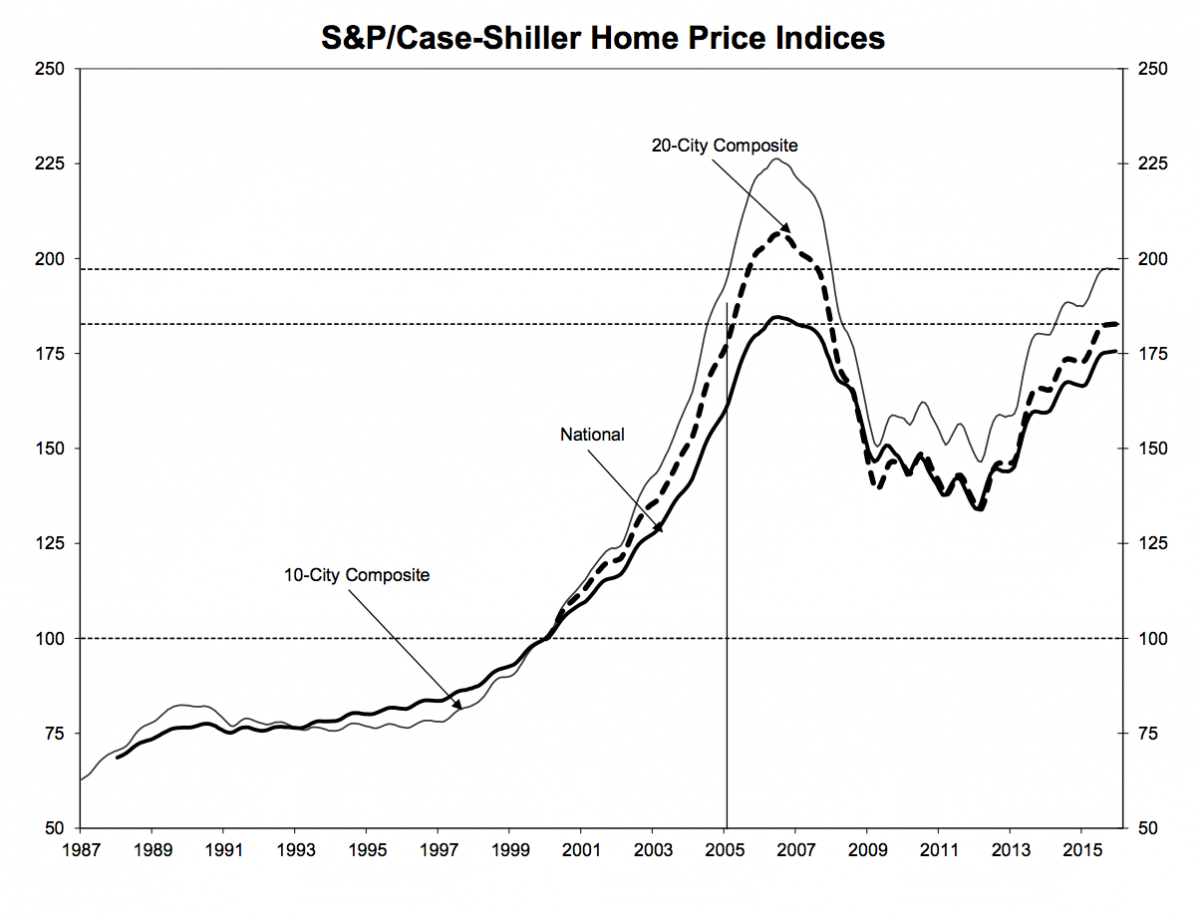 So what has naysayers worried?  The top worry is the overall economy.  Fears over China’s slowdown and the crash in energy prices have caused stocks to falter and coincided with a lull in manufacturing.  Since housing is tied to economic activity, analysts worry that the sector will follow suit.  In addition, new, tighter credit regulations have likely slowed down mortgages on the margin.  To avoid another housing credit bubble, officials have tried to make house lending a slower and more careful process.  These regulations were likely sand in the gears of the market over the past few months. Finally, consumer confidence has slipped in last month’s data; likely due to the swings and plunges in the stock market.  All else equal, since a more confident buyer translates into more sales and higher prices, this is negative news on the margin.

That said, there are many positives underpinning the longer run housing story.  The housing crisis that was the epicenter of the 2008 crisis has almost finished healing.  The massive overhang of foreclosures has nearly cleared, and new foreclosures are back to a long run average. There is also less debt in the system, as distressed homeowners had to sell, and also since many have shifted to renting given tighter lending standards.  With less leverage in the system, we can expect less turmoil induced by a cyclical slowdown in the economy. 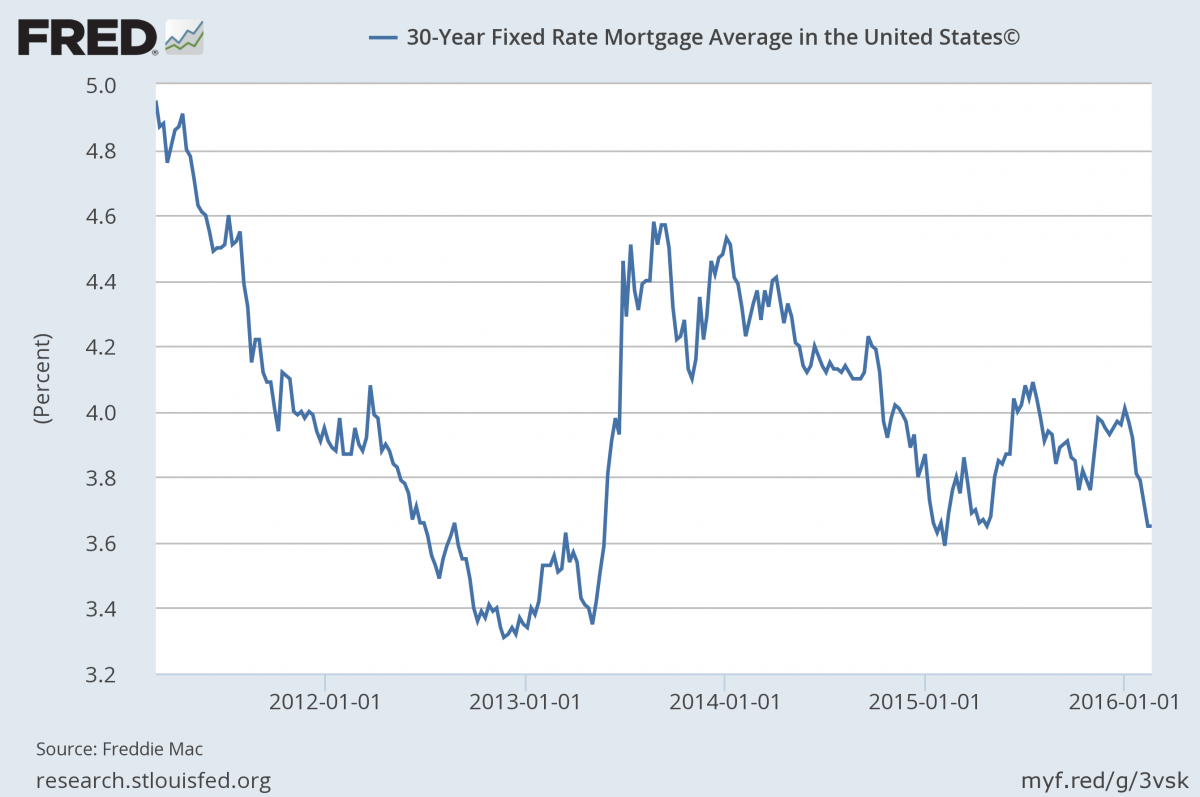 The largest positives for the housing sector remain the ongoing gains in employment (and income) and very low mortgage rates.  The unemployment rate is now below 5%, and thanks to decent wage gains and low energy prices, the consumer has more cash in the pocket and therefore can support mortgage payments, renovations, rents, and thus prices.  Despite the overall recovery in the economy that has induced the Federal Reserve to hike interest rates, long term rates remain very low, dragging mortgage rates back down to historic lows. The chart above shows the steep decline in 30 year mortgage rates in the past month; the price of a mortgage will not be holding the buyers back.

Overall, the positive price and sales trends in the housing market look intact. Ongoing economic malaise could dent sentiment on the margin, but cheap financing along with solid employment should provide a deep underpinning to home sales and prices this year.