Buyers who are holding out for a turn in the market in their favor are going to have to wait.

Buyer’s Market: There just is not enough inventory to tip the market in the buyer’s direction.
There are ominous signs that the market is slowing down. Open house directional arrows are flooding busy intersections. Homes are not flying off the market like the crazy days of the Spring Market. Buyers are not tripping over each other in viewing the latest home to hit the market. What’s going on? Is the market finally tipping in the direction of the buyer? No, it’s just the time of the year, the Autumn Market.

Every year after transitioning from the Summer to the Autumn Market, buyers start talking about a housing correction. Factoring into that belief is that it has been a strong seller’s market for five years now. Home prices have appreciated nonstop, and the median sales price eclipsed record levels earlier this year. As a result, home affordability has dropped dramatically along with buyer’s purchasing power. Many believe that the run-up in values has reached a peak, not just for this year, but for this cycle. The housing market is due for a correction, right? No, not yet.

The expected market time for the Orange County inventory has remained low for years now. This is the expected time it would take to place a home on the market until a buyer and seller consummate a deal by signing an agreed upon contract and open escrow. Currently for the county, it is at 2.59 months, or 78 days, a slight seller’s market. Based upon today’s activity, if a home was just placed on the market, escrow would be opened on November 28th. Remember, that is the average for all of Orange County. The expected market time for the lower ranges is even faster, 51 days for all properties below $750,000. And, it is much higher in the luxury ranges, 385 days for homes priced above $2 million.

The expected market time takes into consideration both the active inventory, homes on the market and not yet in escrow, and demand, the number of new escrows over the prior month. The last time housing leaned in the buyer’s favor was back at the very beginning of 2011. 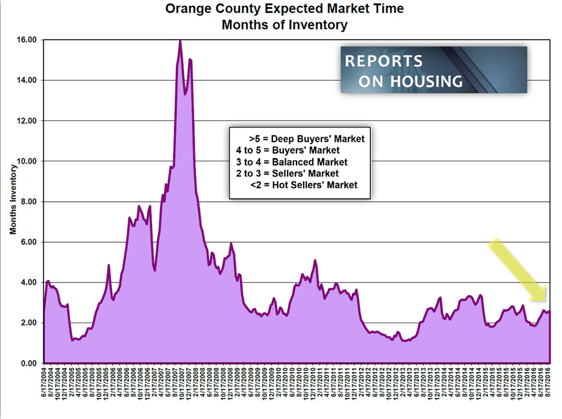 Values have risen dramatically in the past several years and the expected market time has remained below 90 days, seller’s market territory. It has even been as low as 33 days back in March of 2013, a HOT seller’s market where homes were rapidly appreciating on a weekly basis.

Many believe that the housing market is due for a correction and that it will finally be the buyers turn to take advantage of the market. What has been standing in the way is the active listing inventory and continual hot buyer demand. The inventory has been at anemic levels dating back to 2008. Homeowners are not placing their homes on the market like they did prior to the Great Recession. Slower, buyer’s markets come in the way of more homes on the market. There needs to be more than 8,000 homes on the market for a sustainable period of time. The inventory last surpassed that mark in August of 2014, but it only lasted for a month, and then quickly reversed direction. Other than at the end of 2009, the inventory was above 8,000 homes from 2006 through 2011, the meat of the Great Recession. Today, the active listing inventory is at 7,040 homes and dropping. It reached a peak in mid-July of 7,329 homes. The inventory is not poised to surpass and climb past 8,000 homes anytime soon. 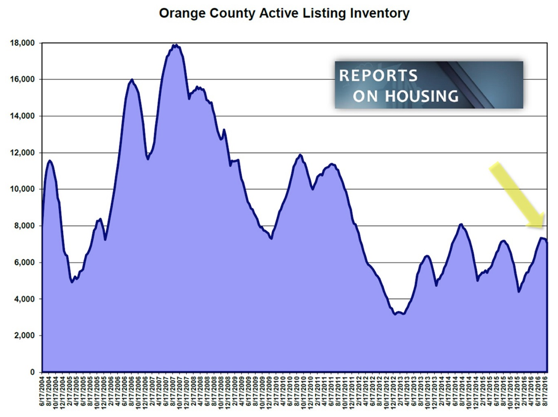 Demand has been hot for a very long time and the low interest rate environment that the Federal Reserve created, and is in no rush to change, has helped keep homes affordable. Prior to the great recession, interest rates were at 6.25%. They are at 3.75% today. To put that in proper perspective, at $695,000 (the median detached home in July) the payment with 20% down would be $2,575 a month with a 3.75% interest rate versus $3,423 a month at 6.25%.

As the economy improves and interest rates rise, the inventory will eventually rise to a point where the market will finally lean in favor of buyers and prices will fall; not yet and not anytime soon.

The current luxury trend has been evolving with a dramatic slowdown in the higher price ranges. The luxury end does not typically follow a normal cyclical pattern. Compared to last year at this time, it has been better below $2 million. However, the luxury end above $2 million has been profoundly slower with a lot more inventory and considerably less demand.

Active Inventory: After hitting a plateau, the active listing inventory dropped significantly in the past couple of weeks.
After peaking this year in mid-July at 7,329 homes, the active inventory only shed a few homes in the four weeks that followed. That drop picked up considerable steam in the past couple of weeks and shed 227 homes, a 3% drop, and now totals 7,040 homes. It will drop below 7,000 homes for the first time since June sometime within the next week. We are officially in the Autumn Market with fewer homes coming on the market. Also, unsuccessful sellers from the Spring and Summer Markets are opting to throw in the towel after not being successful during the best time of the year for real estate. The inventory will continue to drop for the remainder of the year.

Last year there were exactly the same number of homes on the market, 7,040.

Demand: In the past two-weeks demand dropped by 4%.
Demand, the number of new pending sales over the prior month, dropped by 124 homes, or 4%, and now totals 2,719 pending sales, levels not seen since the start of March. Demand is still stronger compared to last year when there were 74 fewer pending sales, 3% fewer than today.

The expected market time increased from 77 days two weeks ago to 78 days today.

The reports on Housing is written and distributed by Steven Thomas.