The Summer Market: The active listing inventory is rising and so is the time it takes to successfully sell a home; summer is here.

Every year it is the same thing. Multiple open house directional arrows are scattered on the corners of busy intersections. More and more FOR SALE signs are popping up in neighborhoods. There are not quite as many buyer showings as there were only a few weeks ago. The word from the real estate trenches is that it is not as busy and homes are not flying off the shelves as they did before. Sellers are growing concerned. What is going on? Why the sudden shift? It is called SUMMER.

The Summer Market begins with the completion of the school year. It is the season of end of the year school concerts, theatrical plays, AP testing, and final exams. It is the season of caps and gowns, commencement speeches, diplomas, and graduations parties. College kids head home for their summer break. Summer has arrived with all of its distractions. Family vacations, bike rides, hiking, trips to the beach, relaxing at the pool, picnicking at the park, fireworks, local concerts, and so much more all pave the way to a bit less real estate activity than the Spring Market.

This year, the unmistakable summer shift is much more dramatic than last year. Last year the change was only slight, so the overall market felt a bit hotter. Yet, that was out of the ordinary. This year the shift is not only a lot more palpable, it came a little early, as the market has been cooler than last few years. So many mistakenly feel that now is the best time of the year to come on the market. That just is not true. In fact, in 2018 the best time of the year occurred between February and March. That is when the expected market time, the amount of time it takes to place a home on the market today and place it into escrow down the road, was at its lowest point of the year, between 52 to 54 days. Since then the expected market time has been growing and is at 63 days today. It will continue to rise until the active inventory peaks, sometime between July and August. The longer homeowners wait to place their homes on the market, the longer it will take to sell. As the summer distractions set in, the active listing inventory methodically rises until peaking in two to three months. At the same time, demand peaks now and slowly diminishes through August. With a rising inventory coupled with declining demand, the expected market time rises.

The Summer Market is not a time to stretch the asking price. Many sellers are learning the hard way that an overzealous approach to pricing results in wasted, valuable market time. This is precisely why currently 11% of the active inventory is reducing their asking prices every single week. These price improvements are occurring in every price range, even the entry market. Buyers are not willing to overpay for a home. A seller will only find success by carefully pricing their home according to its Fair Market Value. How does a seller determine the Fair Market Value? By carefully comparing their home to the most recent closed and pending sales and relying on the professional analysis and advice of a seasoned REALTOR®.

The bottom line: there are only 90-days left to take advantage of the second best time of the year to sell a home, the Summer Market. After that, the kids will head back to school and housing will transition into the Autumn Market.

Active Inventory: The active inventory grew by 5% more homes in the past two weeks.

The active listing inventory continued its swift climb in the past two weeks, adding 296 homes, up 5%, and now totals 5,730, its highest level since August 2017. Since the start of April, it has risen by 22%, 995 homes, the largest increase since 2004. Expect the inventory to continue to grow until peaking sometime between July and August. 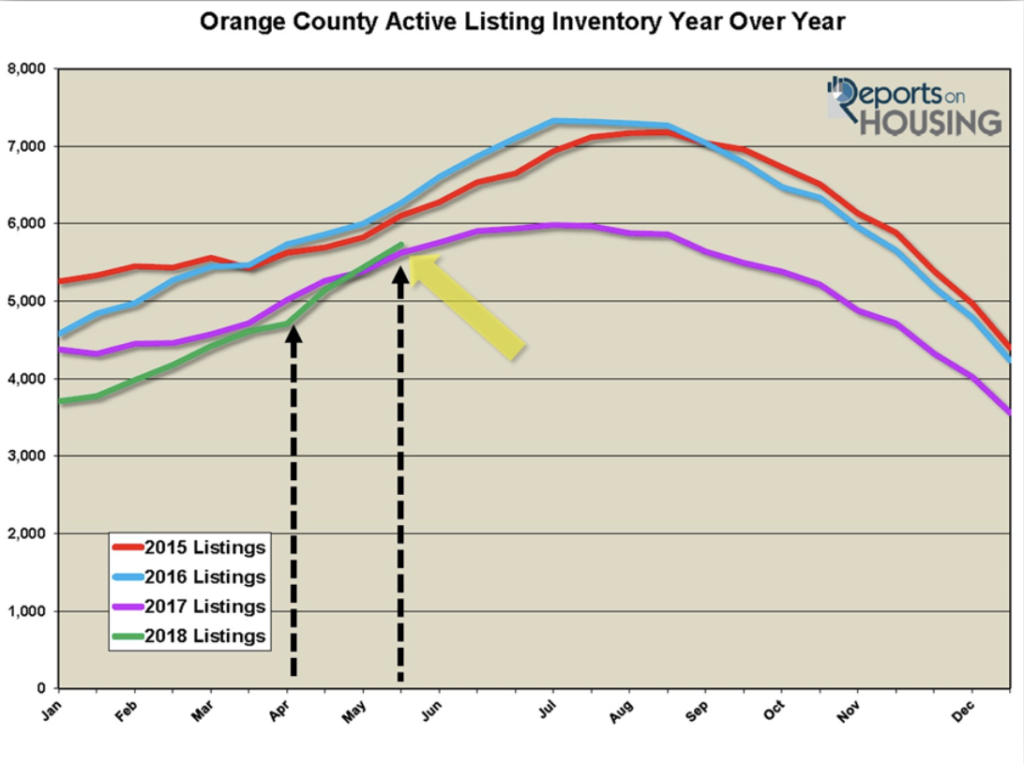 Demand:  Demand increased by 2% in the past two weeks.

In the past two weeks, demand, the number of pending sales over the prior 30 days, increased by an unimpressive 51 additional pending sales. It now totals 2,726, the lowest demand reading for this time of the year since 2014. Demand has most likely reached a peak. Expect it to remain the same for the next month and then drop slightly in July and August.

The expected market time, the amount of time it would take for a home that comes onto the market today to be placed into escrow down the road, increased from 61 to 63 days in the past two weeks. It is no longer a hot, seller’s market (less than 60 days); instead, it is a slight seller’s market (between 60 to 90 days) where seller still get to call the shots, but appreciation is muted. Last year at this time, the expected market time was at 58 days, still a hot seller’s market.

Luxury End:  The luxury inventory and demand increased in the past couple of weeks.

Year over year, luxury demand is up by 68 pending sales, or 18%, and the active luxury listing inventory is up by an additional 134 homes, or 7%. The expected market time last year was at 160 days, slower than today.